As the mom of teenagers, I work very hard to make sure that my teens are healthy.  I organize healthy meals, make certain that my kids have exercise, and of course I want them to get a good night’s sleep.  As a librarian, I see the research about adolescents and their need for additional sleep.  Research studies from UCLA, University of British Columbia, and The National Sleep Foundation, point out that puberty and the onset of puberty shifts the timing of a teens' circadian rhythms and that makes it hard for them to fall asleep before 10 pm.  Knowing all of this sent me on another research journey to find a solution, so that my teens get enough sleep.  Some articles suggest that the answer is simple, "start school later."  However, corporate business schedules within a community often drive school schedules, so recommending that we start school at 9 or 10 am is somewhat unrealistic.  Focusing on the things that we can change is the key.    Based on research and personal trial and error, the solutions for my family have been in routines and rituals.


Some nighttime rituals/routines to consider

See these articles about teens and sleep:

Beyond the Classroom: Sleep and your restless teenager
"Teens in the U.S. have been found to be chronically sleep-deprived and pathologically sleepy. A National Sleep Foundation poll found 59 percent of 6-8th graders and 87 percent of high school students in the U.S. were getting less than the recommended 8 1/2 to 9 1/2 hours of sleep on school nights."

Hard Lesson in Sleep for Teenagers By Jane E. Brody
"Adding to the adolescent shift in circadian rhythm are myriad electronic distractions that cut further into sleep time, like smartphones, iPods, computers and televisions. A stream of text messages, tweets, and postings on Facebook and Instagram keep many awake long into the night.  Just the light from a screen can suppress melatonin, the hormone in the brain that signals sleep."

Understanding the Zombie Teen's Body Clock - by Sue Shellenbarger
"One 2010 study from the University of British Columbia, for example, found that sleep loss can hamper neuron growth in the brain during adolescence, a critical period for cognitive development."

Sleep Rituals: Training The Body And The Mind - by Dr. Michael J. Breus Clinical Psychologist; Board Certified Sleep Specialist
"These days, it's far too easy to push bedtime aside with countless distractions, including those from the television, computer, telephone ... But sleep is not a luxury that you can push aside or save for later. Sleep is critical."

"Sleep and Teens" from The UCLA Sleep Disorders Center
"One change in the body during puberty is closely related to how you sleep. There is a shift in the timing of your circadian rhythms. Before puberty, your body makes you sleepy around 8:00 or 9:00 pm. When puberty begins, this rhythm shifts a couple hours later. Now, your body tells you to go to sleep around 10:00 or 11:00 pm.    The natural shift in a teen's circadian rhythms is called "sleep phase delay." The need to sleep is delayed for about two hours. At first, teens may appear to be suffering from insomnia. They will have a hard time falling asleep at the usual time. While they begin going to sleep later, they still need an average of nine hours of sleep at night. Because most teens have to wake up early for school, it is important for them to go to bed on time."

See New Study from 2017
https://www.ncbi.nlm.nih.gov/pubmed/28504422
Effects of Mobile Phones on Children's and Adolescents' Health: A Commentary 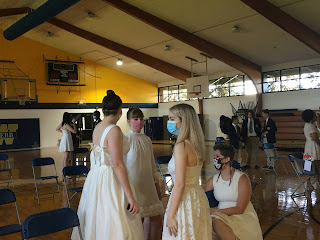 During the global pandemic, writing should have been an ideal task but I found that I had incredible writer's block.  Here are some articles documenting the time.  Avoiding Information Overload During COVID-19 Shelter-in-Place Orders on 04/01/2020 Overcoming the abundance of beautiful and free information offers Beyond Video Conference Fatigue  - Craving In-Person Teaching and Learning Not the Disaster We Were Preparing For on 05/07/2020 We prepare for fires, earthquakes, tornadoes, but not a pandemic. Finding Collaborative Points from a Distance  on 06/08/2020 Turning learning on its head. Embedded 2020  on 08/03/2020 • Being an embedded librarian is not a new concept, but it has new meaning for me as a school librarian since the onset of distance learning and COVID-19. On the Eve of an Election  - Students will be bombarded this month by political ads and media commentary  Part 1: Polarization and Resistance to Fact-Checking Information  - What Is True? Another presidential elect
Read more